Learning to say 'no' has been the advice to many. Indeed, negating words are important linguistic forms to teach in a foreign language curriculum. These forms enable the students to either make a refusal, or denial when they are dealing with an uncomfortable invitation or proposition. A verbal negation is also relevant to prohibit an ongoing action that disturbs the tranquility of a place.

Furthermore, the intelligence to negate provides the power to keep risky offers arising from verbal communication at bay. In terms of shopping, negating words are relevant for bargaining. Saying 'no' generates a capacity for the speaker to negotiate for a simple agreement. In a typical foreign language classroom, Malay students would learn the following three Malay words to perform a simple negation in daily interaction.


Table 1 contains three negating  words in Malay that are commonly used in verbal communication.[2]  Even though the examples in Table 1 are quite straightforward, a  student of Elementary Malay may pose interesting questions including the possibility of using 'ini kuih' (kuih this) instead of 'kuih ini' (this kuih) in example 1. The basis of such a query is understandable if students have the experience of learning the instantiated Malay syntactic form, 'ini’ +  ‘kuih’ in deictic expressions by looking at the pictures while reading out the nouns in view. 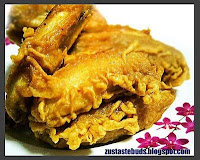 More explanations are required to satisfy an inquisitive mind that examines and generates a particular syntactic pattern across varying types of expression. As a foreground to our understanding of Malay grammar, it is explained that a Malay noun comes before a demonstrative in a typical Malay construction, as follows:


6. Rumah ini rumah saya.
This house is my house
I call this linguistic rule ‘the more important thing comes first’ syntactic principle. A Malay deictic expression that begins with a demonstrative 'ini' is, hence, irregular Malay syntax because the ini-headed phrase inverts the syntactic principle.  Hence, the student's query of *'Ini kuih bukan pisang goreng' is actually an ill-formed negative expression in Malay because it goes against 'the most important thing comes first' principle.
We may test the negation further for more information.
7. Kuih ini bukan pisang goreng    [this kuih is not fried fritter]
8. *Ini kuih bukan pisang goreng  [*kuih this is not fried fritter]


That only 'kuih ini bukan pisang goreng' is a grammatical negation in Standard Malay grammar but not *'ini kuih bukan pisang goreng' suggests to us that negating a Malay sentence with an inverted noun phrase (NP) runs into a conflict of meaning, not least basic negative expressions entail a specific reference but not its presupposition.[3]   In other words, a specific NP is required to provide a scopal dependence for processing the negated information [4].  A similar contrast of English examples illustrating ill-formed negations with non-dependent specification includes the following examples.

In conclusion, recognising and understanding the different negative expressions between languages, especially in the case of English first language speakers learning Malay, is useful for teaching Malay negative words. Interlanguage contrast provides a space of contemplation by invoking a familiar path into the terrain of negation in another language.  Informing Malay learners that negating certain Malay phrases works well with a specific noun reference, but not with its deictic counterpart, is a relevant start towards acquiring Malay negation.
Jyh Wee Sew,
Centre for Language Studies, Faculty of Arts & Social Sciences, National University of Singapore

[1] Kuih, a Malay delicacy, is more complicated than a snack in terms of preparation but less elaborate than a cake in terms of size and appearance.