Grammar Police Have No Authority 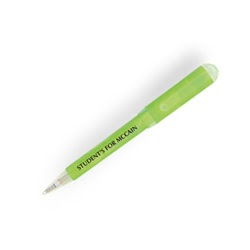 Speaking of misplaced apostrophes, check out the latest piece of John McCain memorabilia from an independent online retailer GOPTrunk.com. If you look real close, it reads, "Student's For McCain." Apostrophes do not just denote possession or contractions anymore; they are slowly taking over plural nouns as well. 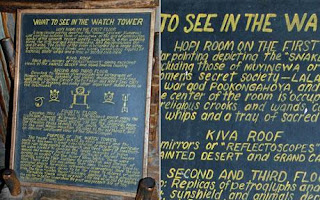 I found this article on msnbc.com about two grammar "vigilantes" (yes, the writer actually compared them to gun-toting civillians) who removed an apostrophe and inserted a comma in a seventy-year-old sign at the Desert View Watchtower in Grand Canyon National Park. If anyone knows what the sign originally said and what the corrections were, please let us know.

This just further proves one of the unwritten rules of grammar: the older it is, the more correct, or should we say "acceptable," it is.

**UPDATE** Thanks to Joe in Albuquerque for the link to a picture of the sign courtesy of the The Daily Telegraph online (see above). No word yet on what exactly was changed.

Link to the picture: http://www.telegraph.co.uk/news/newstopics/howaboutthat/2615741/Grammar-vandals-fined-for-altering-historic-sign.html
Posted by Brady Spangenberg at 12:44 PM 4 comments:

Can you twist and turn without making a splash?

The winning sentence will receive a dual prize package from the UniSA Learning and Connection and the Purdue Writing Lab. 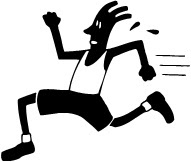 Can you make the distance?

From: http://www.squadraovest.com/
Tonight (Adelaide time) The Grammar Gang (Brady, Susanna, Virginia and Andrea) decided this blog will be the site for the inaugral Grammar Olympics.
You can test your grammar skills and win great prizes like:

Prepare to post to our upcoming Grammar Olympics events
To participate:

A noun by any other name

The OWL recently received an inquiry about what to call "the damned" in the following sentence:

Though "the damned" functions as a noun, the grammatical origins of this construction are not quite as clear. The usual verb-as-noun explanation, the gerund (or "-ing" form), does not apply in this instance. What, then, is the connection between this noun and the verb from which it stems?

This one is tricky, because I think it has two parts. First, "damned" is the past participle of "to damn." Usually, past participles can function as adjectives, as in "the sunken ship." But I could only find one mention of past participles functioning as nouns. AudioEnglish.net notes in very small print, "It is very rare." (http://www.audioenglish.net/dictionary/past_participle.htm)

Think about it this way. If I said, "the sunken," would you recognize the person, place, or thing that I am referring to? You might have an idea, but the picture is not complete. We do, however, understand the reference when I say "the rich" or "the young of this country." These types of constructions are called adjectival nouns or attributive nouns. With "the damned," those of us acquainted with Dante understand that "the damned" actually refers to "those who are damned," a construction similar to "the rich" (meaning "those who are rich"). In this case, I think "the damned" is a past participle acting as an adjective that in turn functions as an adjectival noun.

I would be interested to know if anyone can think of other such cases. In short, how "rare" (or endangered) is this species of noun?
Posted by Brady Spangenberg at 10:27 AM 1 comment: