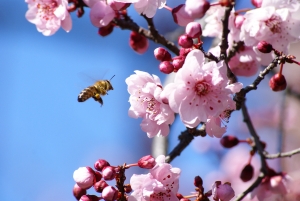 
What a word to spell! The Cambridge Advanced Learner’s Dictionary (online) defines it as ‘the creation and use of words which include sounds that are similar to the noises that the words refer to’. We have a colleague in Singapore, Mr Jyh Wee Sew, who has contributed a guest post on this interesting area:

The legacy of Saussure’s posthumous work which led to the notion of arbitrariness as the typical system of signification in language remains prevalent in linguistics. Most textbooks of (English) language studies explain that language signs denote meaning with little relationship between the sign and its meaning. However, there are plenty of works which go against the notion of arbitrariness in language.

A major study on non-arbitrariness or iconicity is sound symbolism. The first work on sound symbolism that comes to mind is Jespersen’s symbolic [i] that connotes smallness or insignificance (Jespersen 1922 in Jakobson &  Waugh 1987, p. 187). This notion of [i] symbolising weak and small references was tested by Edward Sapir with consistent accuracy. Examples are teeny, wee and itsy-bitsy (Ohala 1994) and clink, jingle, click, plink and bing (Rhodes 1994).

In Australian English we have terms like mozzies for mosquitoes or a seventeen year-old kid (cf. Urban Dictionary). Come to think of it, many words describing or implying fast or high speed in motion have the letter ‘i’ in the words: quickly, hurriedly, lightning [speed], simultaneous, witty, swift, slippery, thrive, jive, tinkling, etc.

I recall reading JR Firth’s work on sound symbolism decades ago. Firth was the first person to coin the term ‘phonestheme’ for submorphemic elements symbolizing a certain meaning that recurs in vocabulary. It is not difficult to trace a loud noise or sound in words ending with –ash. Thus, we have crash, trash, splash, smash, mashed, bash, lash, dash, hash etc.

In fact, we relate a straightforward sound symbolic reference whenever we use hoo-ha, chit-chat, tumultuous, dum-dum or dummy, cockatoo, burst, bomb, pang, boom etc. in spoken or written forms.

Interestingly enough, the noise made by a cockatoo is sound symbolically transferred into Malay, hence the bird is called kakak tua, which is often confused by learners as old sister because kakak denotes elder sister, and tua denotes old in Malay. Winsted (1959 reprinted in 1960, p. 137) lists the Malay word kakak as carrying three meanings, 1. to quack, 2. elder sister (kin or platonic), 3. kakatua (cockatoo).

Playing by ear may be fun(ny) when we learn and compare onomatopoeic terms, i.e. names that have their origins in the sound of the reference.

Jyh teaches Malay at the Centre for Language Studies, National University of Singapore

Another area we discussed is the words we use to describe the sound that animals make in different languages. In English, bees go 'buzz', cows go 'moo' and ducks say 'quack'. Jyh tells me that in Malay, bees go 'dengung' and ducks say 'kuak', while in Mandarin bees go 'wung wung', ducks say 'ya ya' and cows go 'mu mu'.

We'd love to know how you describe animal sounds in your language!