Games for language teaching and learning

Following on from Jyh’s post about the play museum, I thought I’d write about how we can use games in language teaching and learning.

As a language teacher in Portugal in the 1990s, there were lots of games I used with my students. One favourite was the grammar auction, where students had an amount of (imaginary!) money and had to bid for sentences. If the sentence was correct, they doubled their money; if it was ungrammatical, they lost their money. Fortunes were made and lost in the space of a lesson!

Another favourite activity was picture pairs, where cards represented pairs of words and pictures. For example, a picture of an umbrella was matched by the word ‘umbrella’ on another card. All the cards started off face down, and students could turn over two cards at a time in order to find a perfect pair. These cards could be difficult for the artistically challenged teacher to make, but fortunately there were several good books of grammar games with photocopiable activities. Two very useful  books were Penny Ur’s Grammar Practice Activities and Mario Rinvolucri’s Grammar Games. There were others whose names I’ve forgotten, but perhaps you’d like to share your ideas in the comments box below?

Another game was snakes and ladders, in which students threw a dice to go round a board and answer questions on aspects of English grammar. If they answered wrongly when their counter was on the head of a snake, down they went to the snake’s tail a few rows below. However, if they answered correctly at the foot of a ladder, they could go a long way up the board.

We also played dominoes, with words and definitions, or pictures and written words, on different domino rectangles. And of course, we played a lot of bingo, with numbers and words. A slightly less lugubrious variation on the word game hangman was the spelling shark, in which students had a limited number of opportunities to guess the letters that made up a word. If they weren’t quick enough, and didn’t guess the word in number of chances available, the stick figure on the whiteboard walked off a cliff and fell into the mouth of a hungry shark.  The number of chances increased if the teacher was feeling generous!

With very young students, musical colours was a winner. The children danced around to an English song, and when the music stopped they had to stand on a large piece of paper in the colour called out by the teacher. We also did this activity with shapes.

Many games were enjoyed by students of all ages. However, some adult learners and parents of younger students worried that games were not a ‘serious’ learning activity. Their fears were unfounded, as students in my classes were motivated by the games and did well in exams.

Although, as a teacher, I spent a lot of time preparing materials, these games could be used again and again, and brought a lot of pleasure to my students, while at the same time stimulating them in their language learning. Nowadays, of course, there are so many opportunities for online language games too. What are some of the language learning games and websites that you like best?
Posted by Julia Miller at 12:33 AM 7 comments:

Currently, there is a worldwide movement acknowledging the importance of play in the development of children. Playeum, or The Play Museum places several play stations in an enclosure emulating the concept of museum without walls. The aim is to provide multi-disciplinary cultural experiences for families and such a concept is well-received because Playeum has found its sponsorship in major cities. 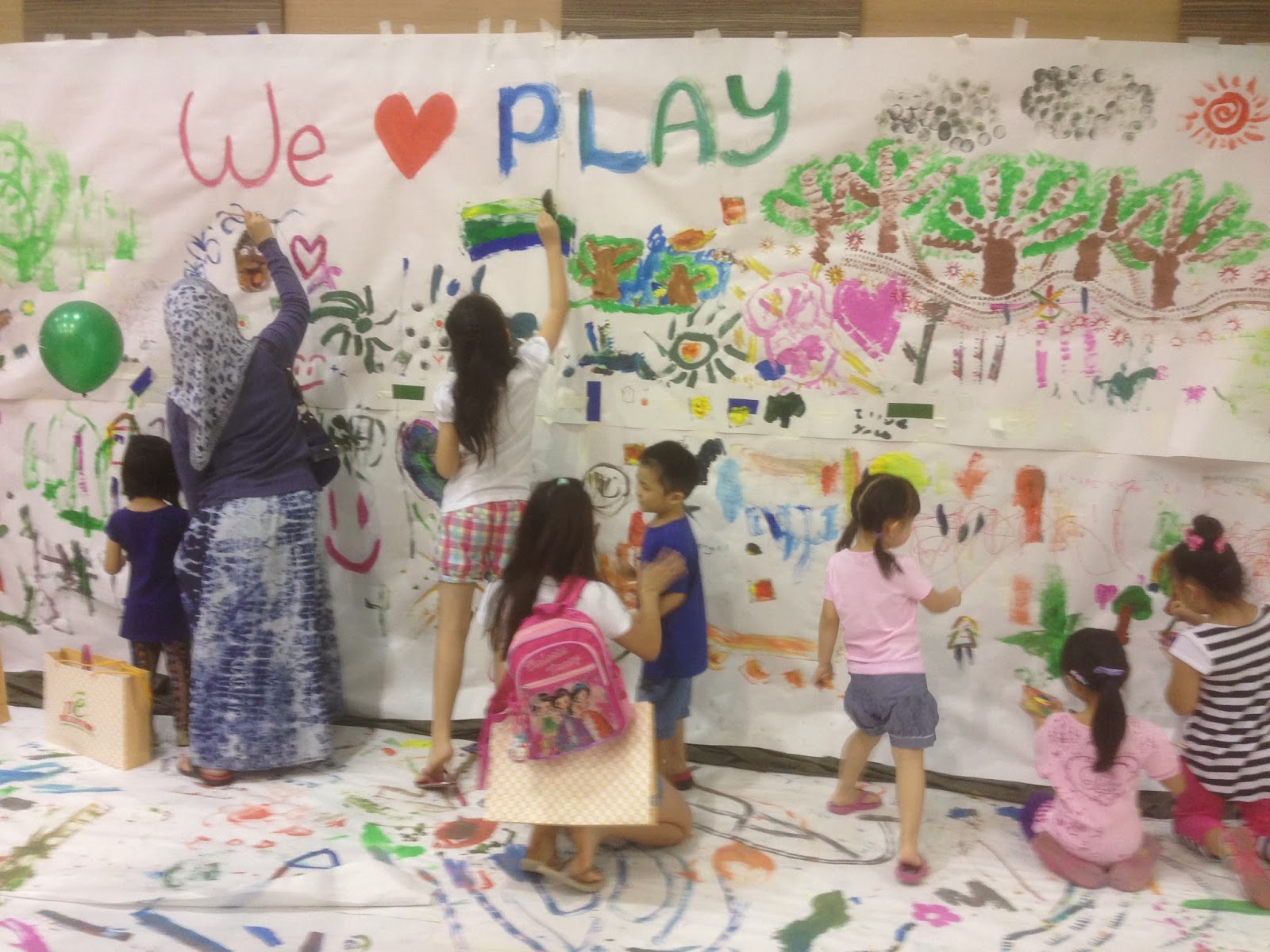 Parents and children collaborating at the pictorial wall


According to the organizer's flyer, Playeum has found its way to Melbourne through ArtPlay Arts Grant in 2011, won a Traiblazer Award presented at the British Museum, London, in 2010, and earned a Whitmore Drawing Inspiration Award, London, in 2009. In Singapore, Playeum became a reality at Tampines Central Community Complex, on 23 February 2014. It was a well-organized event attended by many parents and close-knit family members along with young children. 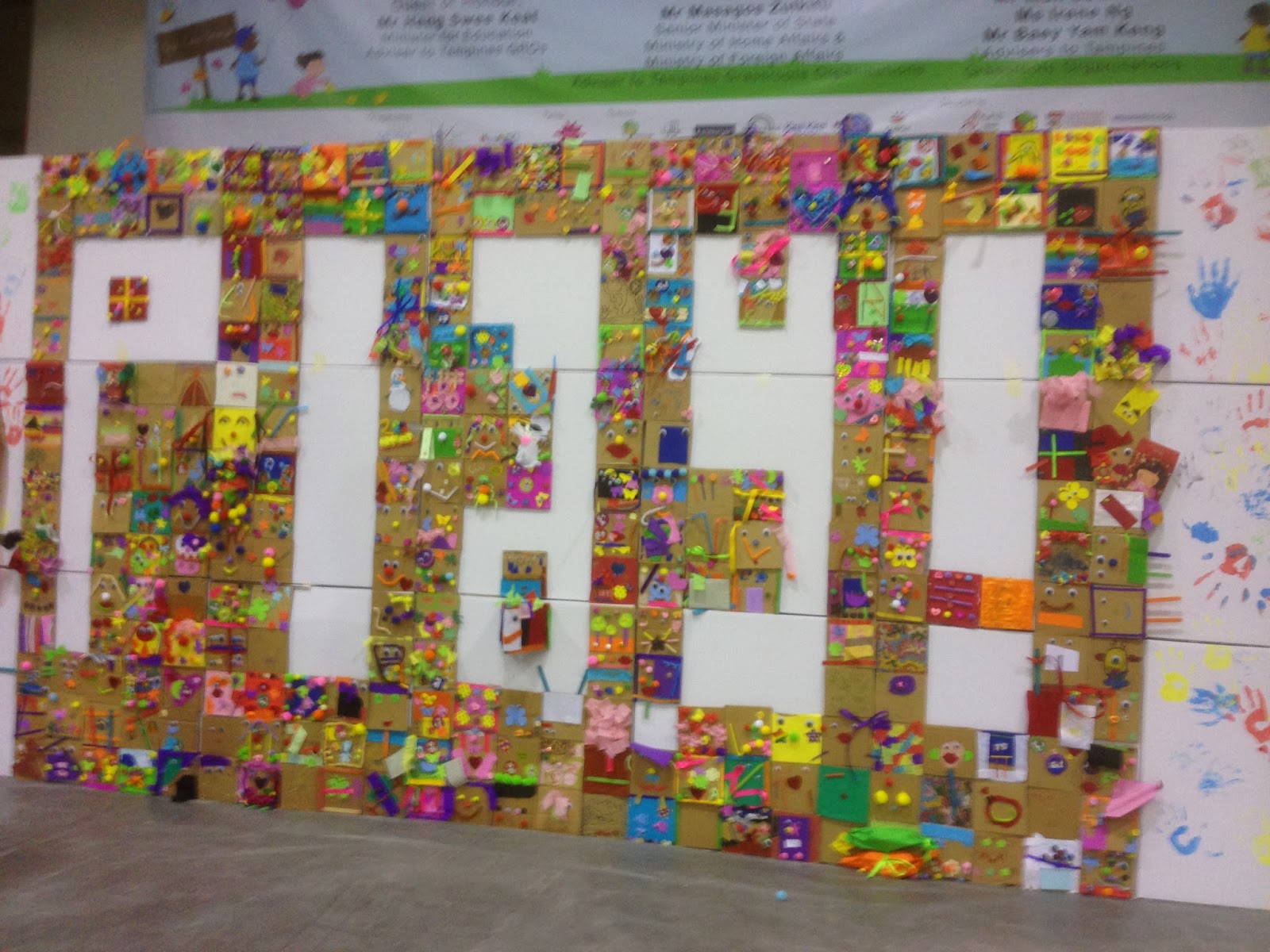 
There are many play stations set up for children to create, innovate, shape and design with confidence. Some of the playful activities included drawing on a large pictorial wall, using flour to mold various shapes with plastic casts, assembling hand-made designs on cards as part of the creative display for the wall mounted on the stage, and running through a maze of cloths to draw on the paper found in selected panels.

Designing on a T-Shirt is another interesting play form that offers much scope for creativity. Young children were captivated by the task. Some put their hard work to practical use by wearing the shirt immediately after they had put their heart and sweat into the designs. 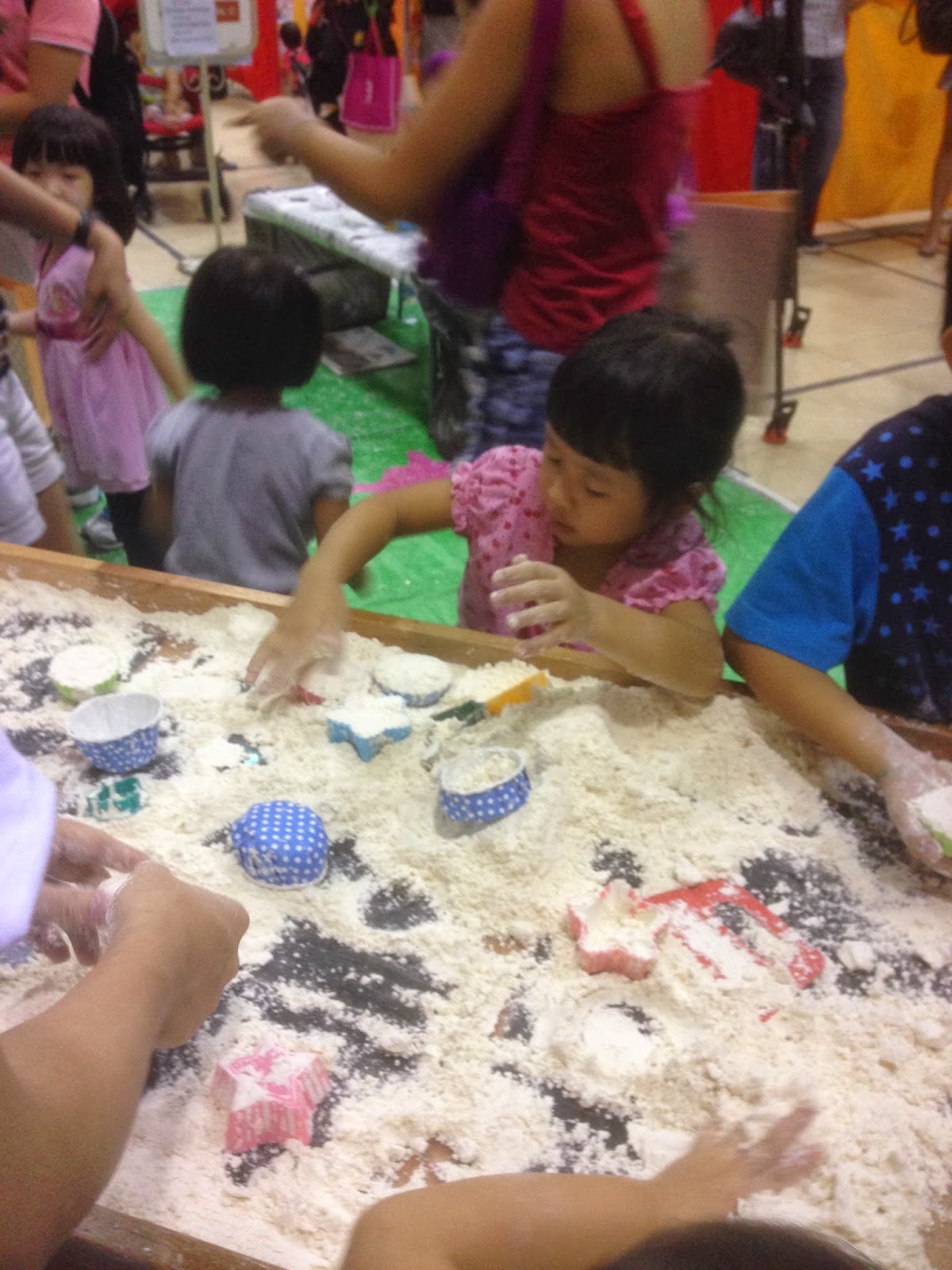 Molding with flour was a captivating activity at Playeum
The Guest-of-Honor, Mr. Heng Swee Keat, Minister of Education in Singapore, was present at the Community Centre. In his speech, he informed parents that unstructured play is an important part of a child’s life. At present, schools in Singapore are also putting emphasis on the EAGLES Award that speaks of students' leadership achievements as an integral part of holistic education. EAGLES stand for Edusave Award for Achievement, Good Leadership and Service which is awarded to Singapore students based on their co-curricular activities and contribution to community services over a one-year period.

At the Community Complex, many parents picked up useful tips from experts who shared some of their observations from studying children at play. One panelist shared her findings that all children wanted to be with their parents as indicated in their narratives for the pictures they drew, which always contain a participating parent event though the parents were not made visible in the picture. Another expert noticed that a child might develop a routinized feeling towards extracurricular classes  that they are enrolled in if they are not provided with their own play time. Going to a music lesson, for example, is not the same as playing the instrument on their own and recognizing their particular strength in the musical genre. 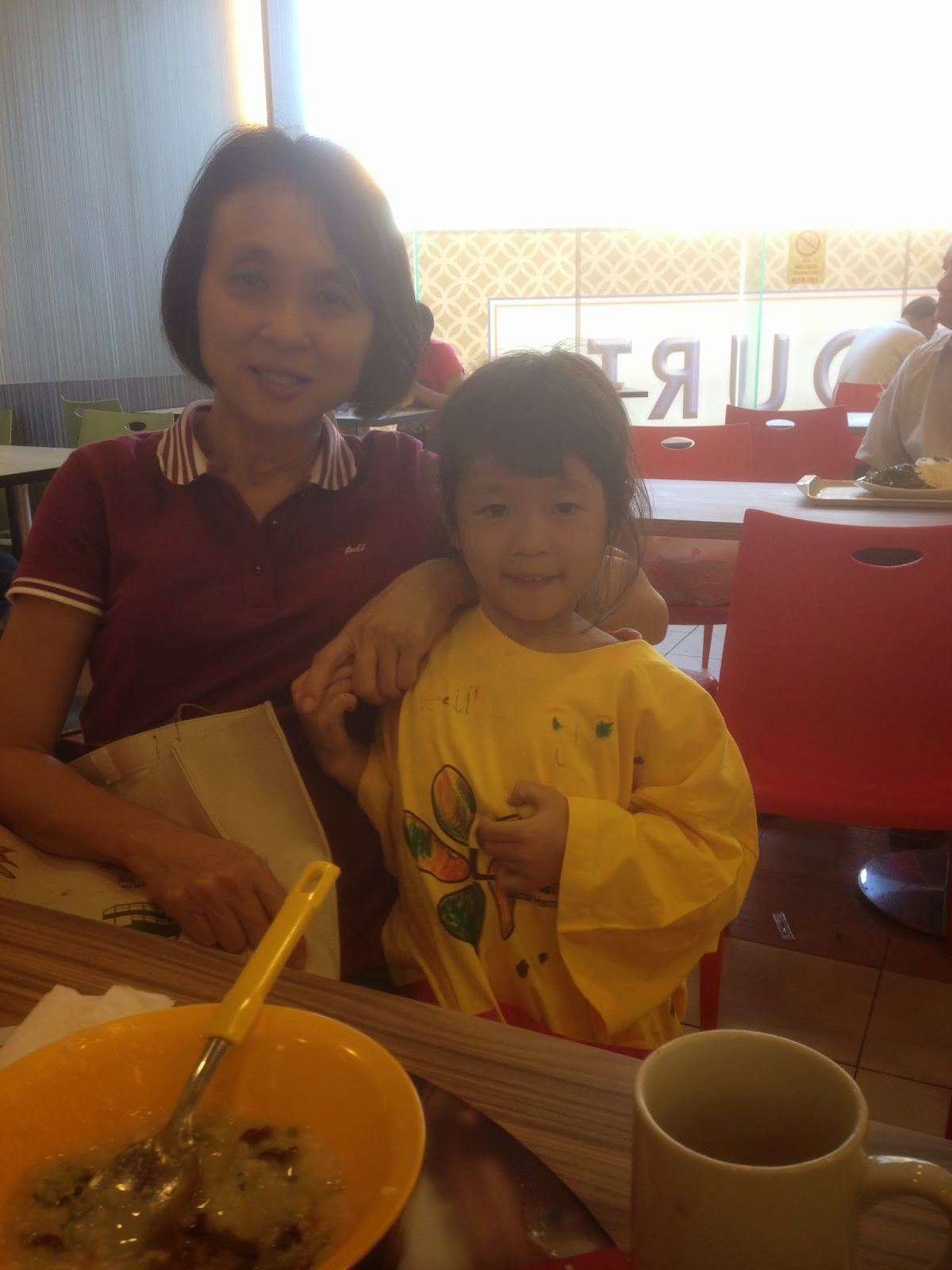 A sense of satisfaction: wearing a self-designed T-shirt

More importantly, an expert also informed that pre-school children lacking drawing ability may indicate a lack of confidence due to the fear of drawing something incorrectly. The resolution is simply to encourage the child to draw openly according to her own view. Confidence would eventually develop from the drawing task. Another expert reminded parents that it is acceptable to have play-talk with young children as a form of bonding. Conversation need not always be a question-answer formulaic sequence. Questions may lead to more questions as a form of interactivity between parents and children.


The message is clear from Playeum that as part of a normal childhood, children must be given the space to explore with colors, glue, flour, paper, ribbon, cloth, straws, etc., not least because such behavior might not be readily available nor would it be a welcome way for some children to spend time at home. The organizers might have generated the realization that it is alright for children to make a mess during play and have fun through the experience even though there is no practical outcome simply because such activities are part and parcel of the personal development in childhood.
I still remember how American television programs such as Sesame Street and The Electric Company enhanced my own command of alphabetical compositions and counting in English. Puppet characters like the Count, Cookie Monster, Ernie and Big Bird successfully reinforced my English counting and spelling that I painstakingly learned in primary school with plenty of fun via rhythmic beats and melodious tunes.

Playeum reminds me that, despite a nightmarish experience in primary school, my language development was rescued by means of playful methodology such as mimicking a cartoon's words, or aping the puppet characters' pronunciation through pseudo-personification. The joy of watching and listening to English on television was all the more important because English as a subject was only spoken occasionally during contact time for a total of 4-5 hours a week many decades ago. One might recall the mimicking effort of a three year-old girl learning to sing in formal Mandarin phrases while dancing in front of the television according to the Chinese music video (Sew, 2013).

Readers of this blog entry are welcome to share their experiences of playing or playful activities that have contributed to their language or personal development.