Helpnest Feature #4: Used (to) in So Many Ways

We recently received a request from Kathy asking about the history of the phrase "used to," as in "I used to drink coffee every morning, but now I drink tea" (personal note: this is a complete lie; my mornings are not complete without coffee). There are plenty of Web sites that discuss the grammar and usage of "used to," so I don't want to rehash what can be found elsewhere. If you are interested, here are a few links to The English Club, The British Council, and The Leo Network. However, Kathy did not ask how to use "used to," but rather where it came from. Enter the Oxford English Dictionary.

Apparently the verb "use + infinitive," meaning "accustomed to doing something," has a very long history in the English language. In fact, its heyday has long since come and gone. According to the OED, the verb was in very frequent use around the 1400s, and it shows up in the "Reeve's Tale" from Chaucer's Canterbury Tales:

It also appears in my favorite work of literature, Edmund Spenser's The Faerie Queene, an imaginative romp through the magical and mysterious world of Faerylond that supposedly teaches the reader how to act like a gentleman. The joke, of course, is that no one in the poem acts like a gentlemen, so all the virtues have to be learned through negative examples, namely what we all used to do but should know better. Here's the reference.

"Her name Mercilla most men vse to call
That is a mayden Queene of high renowne,
For her great bounty knowen ouer all." (5.8.17)

I know what some of you are thinking. Isn't a "d" missing in the first line? Shouldn't it be "used to call?" The short answer is no. Back in the days of late Middle English and early modern English (1400-1600), speakers used "use" in all of its tenses. Even the phrase, "He is accustomed to calling her Mercilla," which still makes a little bit of sense to our tense-sensitive ears, still includes the past participle "accustomed" (may be a verbal adjective--a distinction I leave to the linguists). Nevertheless, the phrase conveys a sense of pastness. A modern translation of Spenser's present tense "use to call," would read something like, "He regularly calls her Mercilla."

Just to prove that I'm not cherry-picking my examples, here's one final example from Milton's History of Britain, this time about trends in English facial hair.

"The English then useing to let grow on thir upper-lip large Mustachio's."

I can't quite place "then useing" in a modern tense context. It has the progressive sense of the "-ing" but instead of a helping verb such as "were" or "had been" to complement the verb, we have an adverb of time "then." Go figure this one, but the point is that "use + infinitive" used to enjoy much more flexibility, especially in terms of tense, in the English language.

Thanks again Kathy for this prompt. It complemented my morning coffee quite well.

Are adjectives the enemy of the writer? 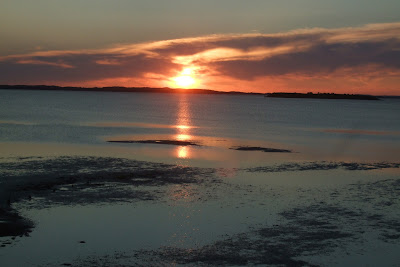 Duff (2010) freely available from PhotoBucket
The sun sunk in seconds, shimmering and hesitating just above the still waters before it disappeared for the evening.  As it faded it cast its apricot hues through the clouds which hovered low in the sky.
or
A beautiful sunset
Hello Grammophiles

For example, I could say 'it's a splendidly gorgeous day today'  (which it is in Adelaide on this December day).   Alternatively, I could say 'the sun is warming my shoulders, glancing off the footpath and illuminating the leaves on the trees'.

Of course, used sparingly and effectively, adjectives can add colour and cleverness to the writing (as indicated by my esteemed colleague Brady, below).

In academic writing, adjectives can be florid and over-the-top, weakening a set of data or a rational argument.

'Smith's (2000) findings were a notable example of how millions of families use social technology.'

'Smith's (2000) study of 150 households across three continents suggested children between the age of 13 and 18 preferred the use of Facebook, while their parents still tended to use email.'

Which paper, do you think, will attract more marks?

Can you think of more examples where actions speak louder  than words (as the old saying goes)?