Primary learning in a multilingual society

Eunice Lee is a seven-year old girl who is studying in primary one. She is enrolled in a private school, which requires her traveling for two hours each morning to the so-called better school. On the eve of Labour Day, she returned to her grandparents' house with exercises from school in three languages. Eunice has to learn Malay, English and Mandarin in school. Her favorite language is English and she dislikes Mandarin, her school-based mother tongue. Right after lunch at 3 o’clock one afternoon Eunice started to complete her homework. The problem-solving strategy that required her selecting and creating answers for the blanks was invoked. This strategy was chosen with the awareness that she hated the Spartan learning style, which made her cry before when she was attending kindergarten. It was the least stressful method in solving linguistic problems for her without sacrificing learning too much. 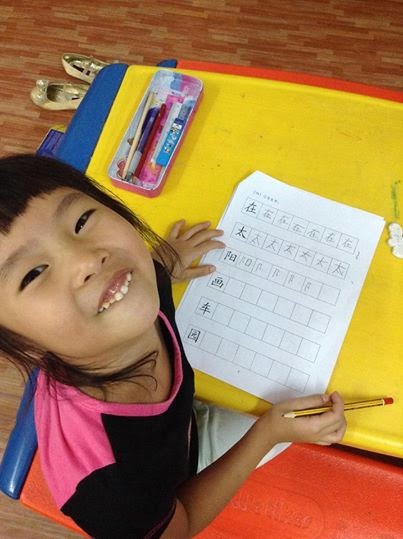 Malay was the first exercise type that Eunice did. She was asked to spell and read the words including the instructions. Whenever she was stranded at a syllable, spelling aid was rendered and she continued with the pronunciation before figuring out what to do with the questions. Her tasks included selecting the right color terms for different objects, such as grapes (anggur), hibiscus (bunga raya), grass (rumput), etc., naming objects by pairing the words with images, and serializing pictures in a flow of before-and-after sequence. The tasks were relatively manageable for Eunice; however, the reading of instructions and words via syllabic segmentation was rather challenging. She had to figure out that [i] is a suffix in /mempunyai/ (owns), which is a four-syllabic word /mem-pun-ya-i/ rather than three */mem-pun-yai/.


In comparison to Malay, English was relatively easy for Eunice who had to decide which picture should be matched with /thank you/ in a relationship chain. The person who received a gift or assistance would require the politeness tag as the corresponding utterance. In another Malay exercise, Eunice had to construct sentences for a pictorial sequence, namely one with a girl smiling at a birthday cake and the other showing the girl thanking her mother for a present. This exercise was trying for Eunice as she needed help in Mandarin to clarify matters and draw upon her personal experience from celebrating her sister’s birthday. The language of metacommunication for completing school work oscillated between Mandarin and English in a complicated way. Mandarin was used to encourage her thinking about Jessie, her sister, and the things related to Jessie's birthday celebration. Yet, English was required to fix the syntactic and spelling errors. 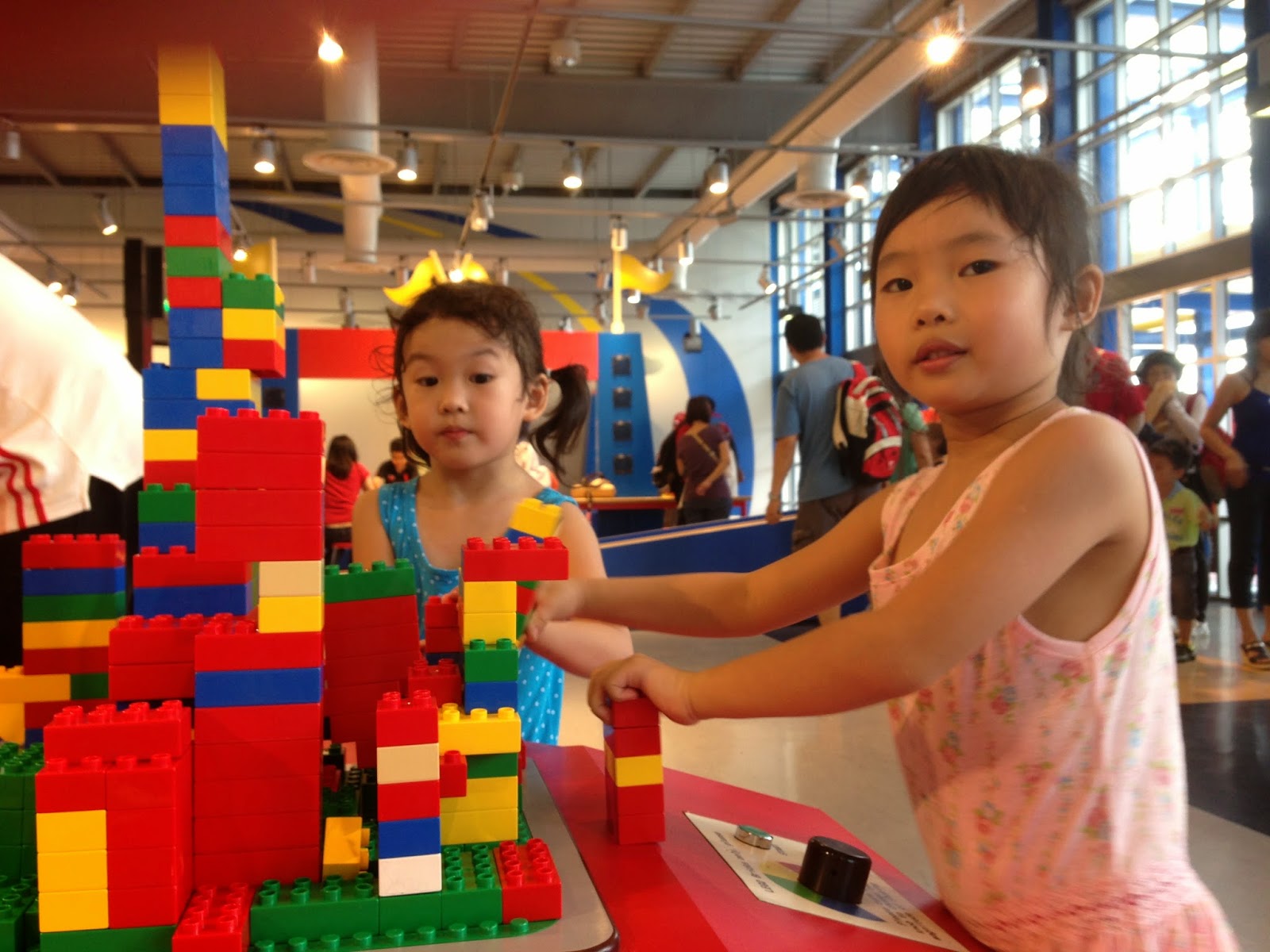 Interestingly, English became the means of explanation in approaching the Malay exercise and English plus Mandarin were the language mediums for talking about the English exercise. The metacommunication of homework solving was a combination of English and Mandarin plus some onomatopoeia for making academic tasks more aligned to a primary school pupil’s mind. Not a single phrase at the metacommunication level was sanitized according to the standard written format in a particular language. This was obvious at the syntactic level as each phrasal segment contained a smattering of nouns, verbs, adjectives, and sounds conjoined within a code-mixing mould involving two of the three languages that Eunice learns.
Mandarin, a tricky subject for Eunice, was the last exercise type to complete. Eunice, who dislikes Mandarin, has to deal with Mandarin school work that contained very many characters testing one's linguistic-visual spatial memory. The hardest exercise already had the answer choices marked with the number of the questions. Eunice informed that the teacher dropped hints for them, reinforcing negatively the pupil's belief that Mandarin was indeed difficult. The hints that resolved 15% of  the work have made learning Mandarin more opaque. For the remaining Chinese exercises, Eunice had to match pictures with phrases, fill in the blanks with phrases, copy Mandarin characters in a series of writing transformation beginning from the basic strokes to a radical formation before the complete emergence of the Mandarin character; and she had to place punctuation marks, namely a question mark, a comma, or a period in the correct places within or at the end of several Mandarin phrases.

In the learning interactivity, Mandarin was used to talk about the Chinese exercises, as it is the common language between Eunice and her maternal grandparents and parents (her biological mother tongue is Hokkien, spoken in her paternal household). 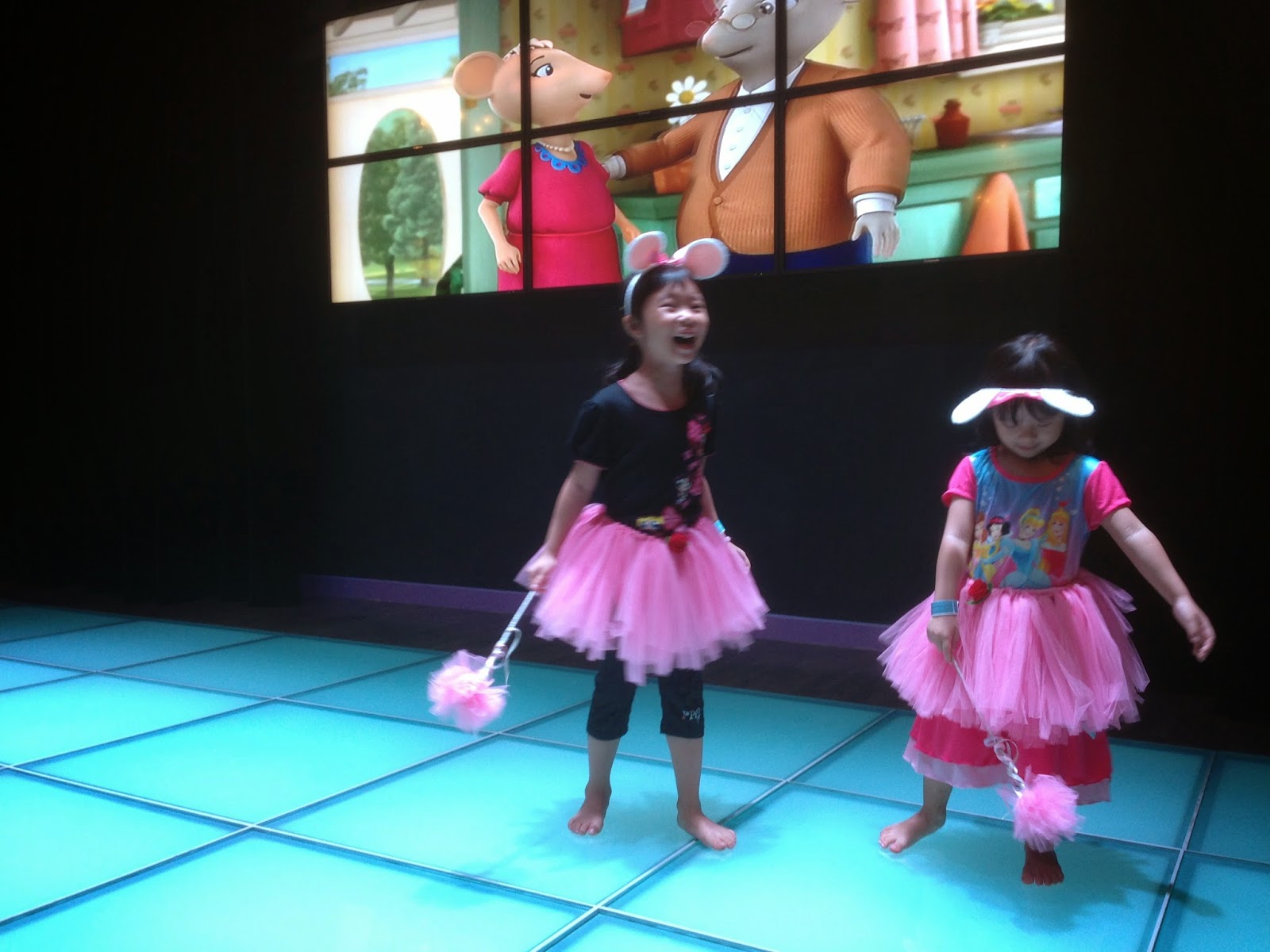 Eunice did not cry after three and a half hours of homework coaching on Wednesday, although her eyes began to swell in tears when she was asked to take out the Mandarin work sheets the next day for reading practice. The reading practice was intended as a means to strengthen her linguistic-visual spatial memory for Mandarin. She did not do it, of course. The domestic helper came to her rescue by switching on the DVD player showing Walt Disney’s top computer-animated musical fantasy-comedy film, Frozen. Yes, I let it go by asking Eunice to play the song ‘Let it go’ sung by Idina Menzel again. 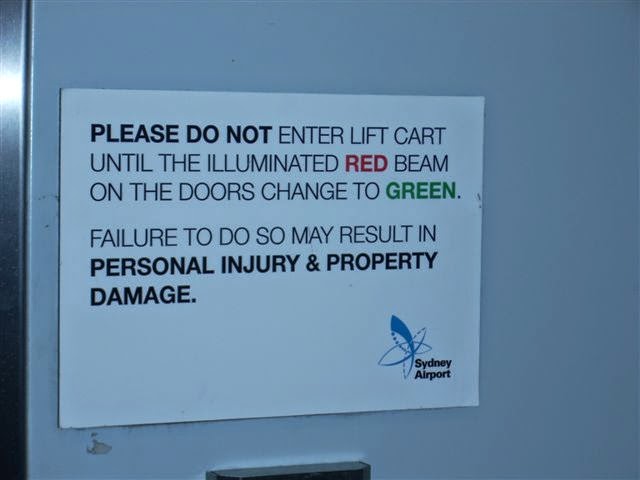 Subject verb disagreements like this are becoming increasingly common in English. It's as though the writer or speaker looks at the last noun they've used and makes the verb agree with that, instead of searching for the subject of the sentence. In this case, it is the "illuminated red beam on the doors" that should change to green, not the doors themselves, so the sentence should read:

Please do not enter lift cart until the illuminated red beam on the doors changes to green.

Am I being unnecessarily pedantic? I don't think so. The UK Guardian newspaper recently published an article about the Idler Academy's  Bad Grammar Awards. Stray  apostrophes feature there, as well as confusing subjects/objects and inaccurate spelling.

Do these things really matter, though? Surely communication is the main thing? After all, language is all about communication. Yes and no. Spelling mistakes may not matter in the long run, but if communication is impeded by bad grammar or punctuation then there may be serious problems. Think about these sentences from the Cybertext Newsletter blog:

Most of the time travellers worry about their luggage.

Most of the time, travellers worry about their luggage.

Are we talking about ordinary travellers or time travellers?

One of my other favourites is this Australian sign: 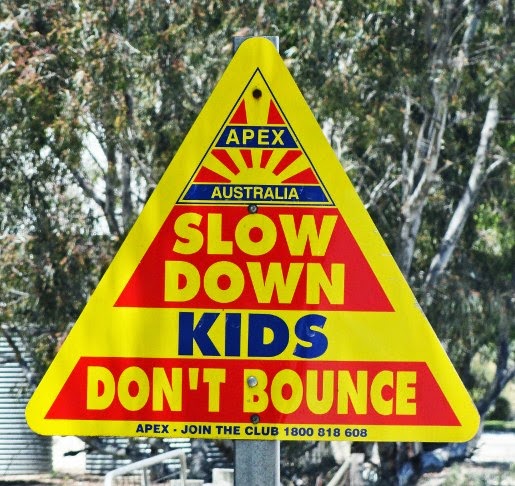 Without the punctuation, this could mean that drivers should go more slowly because children could be injured if a car hit them. However it can also mean that children should walk more slowly and not bounce along the road! 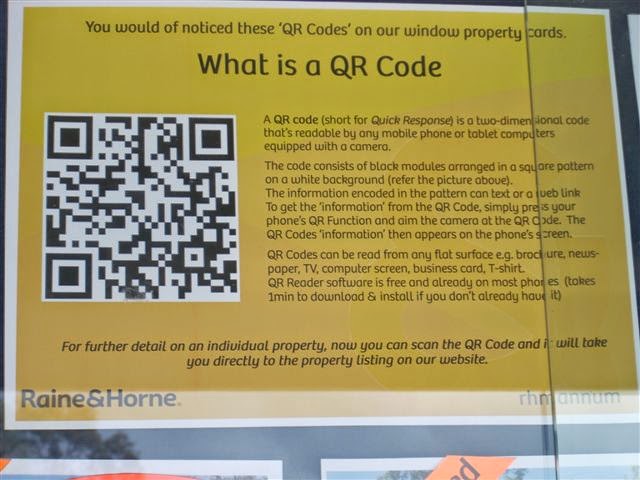 The top line starts, "You would of noticed . . ." When we speak in English we usually say "would've". The writer here obviously didn't realise this sound meant "would have" and not "would of".

Little mistakes like this don't matter in terms of communication, but they make the reader think that the writer is either careless or uneducated, and that is not helpful if someone is trying to sell a product, impress a future employer or write a good academic essay.

What common mistakes have you noticed around you, and have your own writing mistakes ever had a comic or serious effect in your life?