Some Favorite Words from Paradise Lost 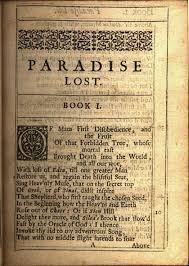 In honor of an upcoming marathon reading of John Milton's Paradise Lost being held at Purdue on October 20, I thought I would highlight a few of our favorite words to read and say. Milton was a great wordsmith to say the least; by scholar Gavin Alexander's count, Milton coined at least 630 new English words, that compared to John Donne's 352 and Shakespeare's 229. Some of his more well-known coinages include "pandemonium," the name given to the devil's new fortress, or "lovelorn" to describe a forsaken nightingale. But these are too familiar; we are looking for obscure words that you can use to impress your friends.

I asked Purdue's resident Milton scholar, Professor Angeilca Duran (who is also coordinating the marathon reading), about her favorite MIlton words and phrases. She responded that she loves dwelling over mythological names like "Serapis," "Asmadai," or "Gorgonian." Even I had to look up Asmadai (6.365), who as it turns out is a traditional pagan god whom Milton identified with the fallen angels. If you aren't slumped over your computer yet with yawning boredom, here are few more philological oddities that are sure to impress both the ladies and the gentlemen.

* jocund and boon (9.793): mirth, cheer, trivial gaiety
[MIlton uses this phrase to describe Eve just after she eats the fruit from the Tree of Forbidden Knowledge. Remember that next time you order a fruit smoothie!]

I would love to hear your favorite words from Milton or any other writer as well as some suggestions for other writers deserving of a place in the Wordsmith Hall of Fame.