I was interested to read the following CNN post recently, saying how dictionaries are defining the word literally with its most current meaning rather than its traditional meaning. Thus literally is now used as an intensifier, meaning very or really, rather than meaning, well, literally. That means that you can now say, There were literally hundreds of choices on the menu, when in fact there were about forty choices. All you are doing is implying that there was a lot of choice. Usage changes, and dictionaries reflect current usage, though larger dictionaries always include original uses too. Of course, dictionaries always try to show the latest uses of words, though purists often object.

Many words are not used literally, though. I loved the CNN comment that "next thing they'll be telling us that there's no ham in hamburger, no egg in eggplant, a boxing ring isn't round and tennis shoes aren't just for tennis". This reminds me of Ogden Nash's poem on the hamburger (also known as a beefburger, particularly in the UK):

In mortal combat I am joined
With monstrous words wherever coined.
"Beefburger" is a term worth hating,
Both fraudulent and infuriating,
Contrived to foster the belief
That only beefburgers are made of beef,
Implying with shoddy flim and flam
That hamburgers are made of ham.

We have so many words in English that are not literally what they claim to be, or which have changed from their original spelling. Did you know that a newt, for example, used to be an ewte, but assimilated the n from the indefinite article? The same is true of an apron, which was originally a napron, and an umpire, which used to be a numpire. This process is called ‘metanalysis’, and you can read more about it in Stephen Ullmann’s fascinating book Semantics: An introduction to the science of meaning.
Other words may be ambiguous, depending on the variety of English you are using. For example, the verb to flog is used colloquially to mean to sell in the UK, but both to sell and to steal in Australia. Likewise, to barrack a team in the UK means to shout abuse, while in Australia to barrack for means to shout encouragement. As with ‘literally’, the word has come to change its meaning. There is obviously potential for confusion there!

When you think you are using a word to say one thing, but you are actually saying something else, that word is called a ‘false friend’. This was brought home to me when I lived in Portugal, where the word marmelada refers to a kind of quince jam. For me, as an English person, marmalade was always made from citrus fruit, and often had a bitter taste. Our local supermarket didn’t know this, though, and they ordered several boxes of what turned out to be English orange marmalade. No one bought it except for my family, so the price went down and down and we ate marmalade for months. Paddington would have been happy!
All this goes to show that language develops constantly, from one country to another, from one variety to another, and from one year to another. Online dictionaries try to reflect these changes and are a great place for learners of a language to check current usage. However, there are always new things that we can watch out for, and it's fascinating to see how words change their meaning.

That’s why I literally love language!

Is the prerequisite of singing reading? Adults normally read the lyrics first before they upgrade the words into a song by adding melodious intonation. Or if the opposite is true, one would then claim that one sings first before checking out the lyrics. Normally, we listen to songs before deciding if we would like to be part of the fandom as a (singing) listener.


For Jia Yi, a three-year old, she sings first. The songs she sings contain 30 to 40 Chinese words. She does not understand the lyrics but she likes Chinese New Year songs very much, as the songs are sung by her peers in colorful costumes. Jia Yi sings and dances along for hours while watching her peers singing joyously. Below is a sample of Jia Yi having fun while watching a video in her parents’ bedroom:

Jia Yi singing to her favourite tune in her parents' bedroom
In case you think Jia Yi is a monolingual Chinese girl, she is also a true blue fan of Hi-5 and she watches Disney Junior Channel, which is part of a paid telebroadcast delivered by ASTRO, a company offering a private telebroacast service. Disney Junior shows English cartoons and musical programmes especially tailored for children below 12.


Arguably, singing has a captivating effect on young and adult minds. In Jia Yi’s case, the CD-Rom of Chinese New Year songs is a launch pad to pronounce Mandarin words in a melodious manner. We may regard the singing as an enhancement of linguistic and rhythmic intelligences in Jia Yi’s cognitive development. 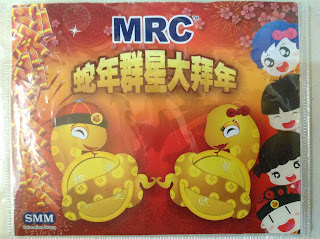 The magical effect of singing on reading seems to garner a steady following. In an alumni sharing session, it was mentioned that Thai songs were used to teach secondary school students Thai before their actual volunteer work in Thailand. My Thai teacher Achaan Sudha included a lot of songs in her Thai lessons as part of our learning extension. My Thai learning became quite a memorable experience with the use of songs.


Beyond reading development via rhythmic intelligence, cultural strengthening is another plus point when Chinese New Year songs are used in early childhood. The songs in Jia Yi's CD-Rom are concerned with the celebration of spring in the lunar calendar. There are plenty of Mandarin references to red packets, good wishes, auspicious terms, as well as communal semiotics such as the color red, mandarin oranges, gold coins, the God of Fortune, peach blossoms and willow tree. 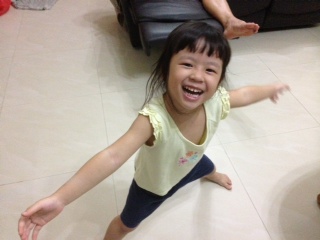 The time spent listening to the songs is a blessing in disguise, not least because it is a positive distraction that prevents Jia Yi from playing digital games too often, like Scarecrow and Candy Crush, which are readily available on the family's iPad. That means Jia Yi's digital exposure to terms such as divine, life, saga and sugar is lessened. The risk of developing a distorted or engineered English comprehension by means of gaming lexicon also decreases. While Harry Potter and Lord of the Rings make some interesting alternatives in her collection of CDs, it is appropriate for Jia Yi to sing about some of the cultural references that are closely associated with her cultural heritage before her next trip to LEGOLAND.