Welcome back to the Purdue students. You are about six weeks ahead of the students at UniSA (in Adelaide, South Australia) who will return to Uni in early March.

We thought it might be useful to give you some 'gold passport' tips towards winning academic writing. Here is a triangle we use here at UniSA which is based on the work of Kaldor, Herriman and Rochecouste (1998). It lists the hierarchy of things you need to get right in writing at Uni. It's not that any of these are any less important than the others, but they generally occur in this order when writing. In other words, you need to get the big picture right first. 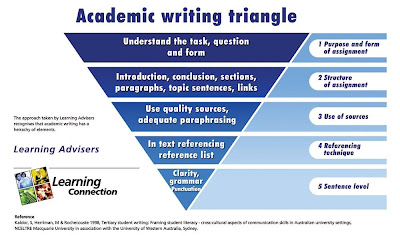 Understand the question, task or form

Is it an essay you are writing? Is it a report? Each of these genres will have particular attributes. Essays, for example, are continuous prose which more often than not explore a particular argument. Reports are exemplified by their headings and subheadings - they are highly structured and objective.

Your work should have a clear introduction (aim or statement of position, purpose, academic definitions of key terms); conclusion (summary, point to the future) and logical 'sections' (topic sentences in the case of an essay; logical headings and subheadings in the case of a report).

You should aim to use for up-to-date sources - ideally from academic journal databases. Wikepedia is generally out (although probably OK for gaining an understanding of a topic). Make sure you know about paraphrasing and reporting the ideas of others.

Your reference list may well be the first place a lecturer (professor) goes before reading your paper and they will be looking at the breadth of sources used as well as their quality.

The mechanics of referencing are important. If you are using, say, the Harvard system, then find a guide which gives you information about the conventions and layout (where all the punctuation goes).

These are also important, as they give your work the professional touch. Without attention to these things your work is demeaned and the meaning of what you're communicating can be compromised.

Be sure to post a comment about your best academic writing tip. What have YOU been rewarded for?

Up With Which I Will Not Put

One of the grammar rules that many of us remember from our elementary school days is the one that says, "A sentence cannot end in a preposition." Attempts to follow this mythic rule (Grammar Girl calls it "grammar myth number one") often lead to some pretty twisted relative clauses, including those relative clauses involving whom. Here are two examples, one attributed to Winston Churchill (though some dispute that he ever wrote or said this), and one I heard just yesterday.

This is something up with which I will not put.

This is something I'm not gonna put up with.

If the first sentence doesn't send your head spinning, then I am sure the second sentence is surely setting off slang alarm bells. Let's back up for just a moment and refresh last week's post; what are relative clauses anyway, and why should you care about them? Relative clauses are dependent clauses (they cannot stand alone as sentences), and they provide additional information about a noun. Relative clauses feature both a subject and a verb that are grammatically INDEPENDENT from the main clause. Take this sentence for example:

I went over to my friend's house, which is located on Mason Street.

who, whom, that, which, whose, where, when, and why

Once you select a relative pronoun, all you need to do is finish out the clause. This is where the No Preposition at the End of a Sentence Brigade chimes in. Just like regular sentences, relative clauses cannot end with a preposition, they say. The best solution is to take the preposition and place at the beginning of the clause. So we have constructions like:

These types of constructions are quite common in German. But as I said in the last post, they sound quite formal to my non-Churchillian, American ears. Guessing from the readership commentary, the "whoms" and "with whoms" sound too highbrow for most of our sensibilities.

Reader question of the week: What is the weirdest preposition + relative clause combination you have ever heard? Send it in and let us all have a laugh. For my part, here is a YouTube video of a Ben Affleck Saturday Night Live skit that satirized Keith Olbermann, one of America's more excitable news commentators.

Regards,
Brady
Posted by Brady Spangenberg at 5:30 AM 14 comments:

Does "Whom" Still Exist?

After a winter holiday, the Grammar Gang is back! We want to poll our readers and ask whether the word "whom" still has a place in their everyday vocabulary. Do you still use, or perhaps hear others using, the relative/interrogative pronoun "whom?" Or do the people who use "whom" all sound like nineteenth-century Victorians who just stepped out of a time machine?

What is the word "whom" anyway, and how should you use it?

"Whom" is a pronoun that always refers to a person. You would never use "whom" to refer to your pet rock or your most recent video game purchase. Secondly, "whom" provides a signal that the person in question is the direct object of the verb. In other words, whomever (see!) the "whom" refers to is receiving the action of the verb (not performing the action). As my German 102 instructor once said, the direct object is the thing that is being verbed.

who, whom, that, which, whose, where, when, and why

The name, relative pronoun, comes from the type of clause that it introduces, namely the relative clause. These clauses are subordinate clauses (i.e. cannot stand alone as complete sentences), and they provide additional information about someone or something. Here are two examples:

The man, who is standing in the corner, is my father.
The boy, whom the teacher told to go outside, is crying.

So, who will answer this post? And to whom shall I reply?
Brady
Posted by Brady Spangenberg at 5:15 AM 11 comments: