The Grading Game - A guest review 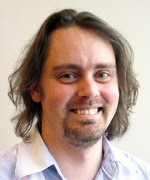 This submission is a review of an online game from Dr Chad Habel.

Chad is a Lecturer in Higher Education and is the Coordinator of Adelaide University's University Preparatory Program.

Images taken here are from The Grading Game

My interest was immediately piqued when I came across a short review of The Grading Game during my usual web-trawling. Although not obsessed with grammatical correctness, I have done enough teaching of grammar and writing to wonder if a game could effectively build these skills into an engaging and fun format. With my particular interest in game-based learning I was keen to see if gameplay elements could combine with digital pedagogy and assessment design to potentially build player's language skills. The Grading Game is about the best I've seen and with a free version and a very cheap ($0.99) full version it's certainly worth a look. 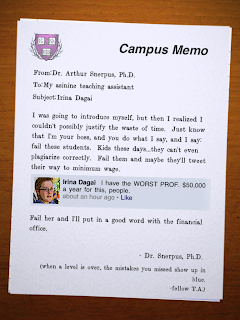 This game was developed during a "game jam" event where participants were encouraged to develop (yet another) shooter game. (Game jam is like boot camp for game developers, where groups of developers get together for 48 hours to create new game designs.) The outcome is the Grading Game, which uses content from Wikipedia (correctly attributed via an information page) to pose 'correction' challenges for the player.

You, the player, act as a misfortune-plagued teaching assistant to the despotic Dr Snerpus. Not only does the Professor berate his teaching staff and goad them for their financial troubles, his main aim seems to be failing his students and ensuring that they get the lowest grades possible. This will appeal to anyone who has undertaken postgraduate studies while trying to make ends meet by teaching. This approach may slightly alienate those not familiar with the North American system, though.

The core gameplay revolves around ‘grading’ assignments written by fictitious students, who are given names and Instagrammed photographs to build the scenario. The gameplay is perfectly designed for the iPad, as the aim is to read a piece of text and tap on each error in a limited timeframe. Finding all errors (up to twenty or thirty) will earn a time bonus, while touching words that are not errors will erase two seconds off your time limit. You score points for corrections and accuracy in the form of money, which is taken off your fictional student loan. There are a variety of game modes in the full version, and a surprisingly large amount of content: nearly a hundred different topics that ‘students’ write on. The errors are generated so you don't see the same sector errors twice, and they consist of spelling errors, extra words, run-on sentences, and vaguely defined ‘grammar’ errors. The presentation is simple but slick, with minimalist animations and sound effects. All this makes The Grammar Game quite impressive, and overall it is fun, engaging and quite addictive. 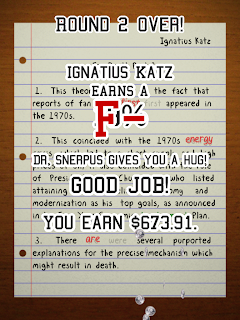 The question that comes to mind is how well this game helps players to learn anything about grammar, or find errors in their own and others’ writing. On the up side, the game does engage players in an authentic task: reading text for errors and identifying them under pressure. Unfortunately, though, the actual errors that occur are a little less authentic, since they could often be found by a spellchecker and are generally unlikely to arise in student writing. What is very useful, however, is that the errors are typified: at the end of a round the player is shown the errors they didn't pick up and they are tagged as spelling, grammar, run-ons, and so on. This element of the game may encourage the player to begin thinking about why a particular error is wrong, and this could lead to more strategic thinking about language use is properly transferred across contexts. Ultimately, the game does a good job at giving players opportunities for finding errors under pressure, and this skill in and of itself can be quite valuable, if writers can apply it to their own work. 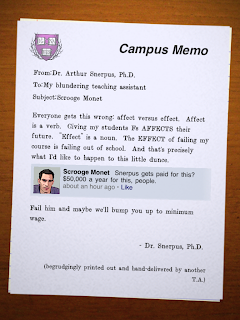 Unfortunately, however, the main learning model present here is all-too prevalent in learning games. Players are expected to learn through exposure and drill exercises, which is a pretty limited form of learning. For example, identifying why an error is wrong is not built into the gameplay or the reward/assessment system, so any learning along those lines is likely to be coincidental. Having said that, it is true that language development is one area where immersion and regular contact and practice is more beneficial than it may be in other domains. There is also some effort towards direct instruction within the game environment: Dr Snerpus' memos often contain explanations of points of language use, although they are not usually linked to the activities to follow. Put simply, this game is not designed for learning, it is designed for fun.


To be fair, The Grading Game is never presented as a learning system beyond introducing some interesting trivia in the content of the levels. The learning element is an expectation I have applied to it based on my own interests. As a game for fun, it is fantastic, and I am inclined to enthusiastically recommend games which have people playing with words or numbers, even just for the general contact with the life of the mind. At the same time it feels like there is an opportunity lost here, but it will require specific expertise in both game design and pedagogy to build a learning game for grammar that has genuine power to help people learn about the nuances of our language.
Posted by Andrea Duff at 4:28 PM 1 comment:

Tis the season to celebrate diversity

Happy (Western) New Year to all our Grammar Gang readers - near and far.

Did you know in the last week, most of our visitors came from the United States, the United Kingdom, Canada, Germany and India?   This underscores the fact that visitors to the Grammar Gang are a culturally and linguistically diverse group.

When I first started the Grammar Gang with my colleague, Linda Bergmann (from Purdue), I was a Language and Academic Adviser at the University of South Australia.  My work with language, at that time, was about clarity of expression (aided by correct grammar and punctuation); appropriate tone or register in writing; understanding the task (essay or report?); introducing sources and referencing; explaining data and research and understanding structure (introductions/conclusions/topic sentences).

These days, my work has taken me to another sphere of influence in language, and that is language for inclusivity in a diverse world.  This is linked to the work our team of Aboriginal tutors and I do with computer scientists, engineers and environmentalists in preparing them for professional practice.

To talk about language and diversity is a big BIG subject - way bigger than this post.   However - with the help of some friends - I would like to start a conversation to which I hope you will add.


Written and spoken language are key conduits to a respectful environment and the mores and culture around these change over time. It is so very important for students to understand respect and protocols around language.  If we don't attempt to get this right we can look a bit silly (at best) or unprofessional and disrespectful (at worst).

For example, where once it was regarded as acceptable to use the term 'Aboriginal tribes', a student would be encouraged to use the expression 'Aboriginal community'.  Similarly, in Australia, we tend to refer to 'Aboriginal' and 'non-Aboriginal Australians' rather than names which are based on skin-colour - such as 'black' and 'white'.  The acceptability of this can be very different across cultures.

Sarah Landers - one of our tutors at UniSA - developed a resource for students and others to use and here are a couple of slides to demonstrate respectful terms AND diversity in language:


Sometimes, though, context and history can make 'finding the right words' confusing.   For example, the use of the term 'Indigenous' is ambiguous in Australia.   Our Federal Government in Australia recognises this word (over the use of 'Aboriginal') because it encompasses Australians from the Torres Strait Islands who would not normally identify with the term 'Aboriginal'.

John Browne, Senior Academic Adviser in the Indigenous Student Support Unit at UniSA points out that South Australians much prefer the term 'Aboriginal' over the use of 'Indigenous'.

He said, 'Anyone can be "Indigenous" to a country if they are born there, but Ab-original denotes the "first Australians" prior to colonisation and since beginning of time'.

'Indigenous' is a more academic or official label implying anyone who was born in Australia, he said.

To make matters more interesting, there were many, many Aboriginal countries (or nations) prior to European Settlement in Australia.   Some people may well refer to themselves as Ngarrindjeri; Kaurna or Pitjantjatjara, depending on what part of Australia they come from.


In our experience teaching in the Indigenous Content program, we find students are almost always well intentioned - even if sometimes they don't quite get it right.    According to Sarah, using correct and respectful language is everybody's business and she says we all have a role to play in pointing out the right language.   There is a simple bottom line:  if you are unsure of the correct terminology, ask.

Now - over to you, dear readers.  We would like to hear about your experiences with language and diversity - particularly as these things relate to culture.  It's a BIG subject and a most interesting one.
Posted by Andrea Duff at 5:44 PM 6 comments: